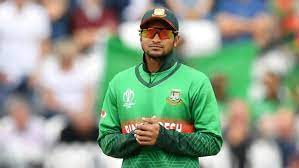 Imrul Hossain for DOT
[2] Afghanistan’s Mohammad Nabi has displaced Shakib Al Hasan from the top spot to reclaim the no. 1 position in the ICC rankings for all-rounders in T20Is, report The Business Standard.
[3] Shakib played in the first four matches against New Zealand where he picked up 4 wickets and scored 45 runs. He remained wicketless in the third and fourth T20I after claiming his 106th T20I wicket, just two wickets away from creating history. He has been out of touch with the bat ever since he returned from his ban.

[4] However, Bangladesh’s premium fast bowler Mustafizur Rahman has gained two spots and moved up to the eighth position in the rankings for bowlers in this format. Shakib remains at no. 9 in the list. Tabraiz Shamsi, Wanindu Hasaranga and Rashid Khan hold the top three positions.
[5] South Africa’s Quinton de Kock gained four spots to claim the eighth position in the rankings for batters in the 20-over format.
The top three, though, remain the same. England’s Dawid Malan retains the top spot while Babar Azam and Aaron Finch hold the second and third position respectively.