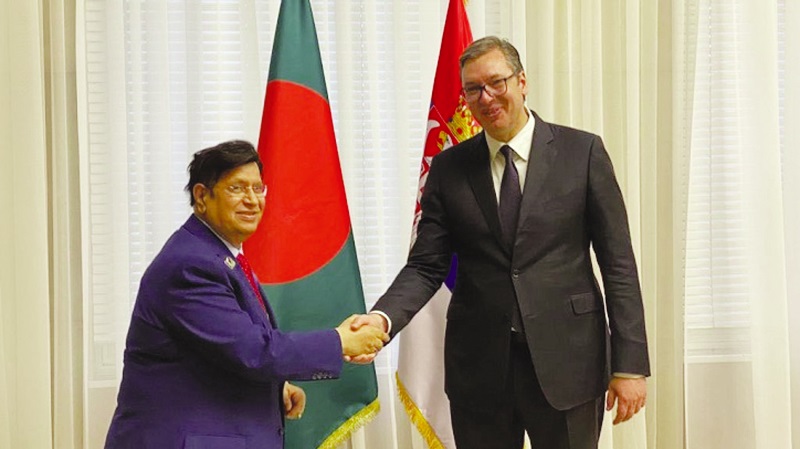 [3] Vucic shared his deep appreciation while he received Foreign Minister AK Abdul Momen on October 11 at the Palace of Serbia, Belgrade on the sideline of the ongoing NAM meeting in Belgrade.

[4] During the meeting, Momen mentioned the cordial and traditionally close relationship between Dhaka and Belgrade which is rooted in history. He especially touched on the personal friendship between Father of the Nation Bangabandhu Sheikh Mujibur Rahman and President of former Yugoslavia Josip Broz Tito.

[5] Serbian President was enthused to learn that Bangladesh is currently celebrating the Birth Centenary of the Father of the Nation Bangabandhu Sheikh Mujibur Rahman and the Golden Jubilee of Independence of Bangladesh. Observing that Serbia’s ongoing and ambitious development programmes will require vast human resources.
, Momen offered skilled and semi-skilled workers including IT professionals, electricians, plumbers etc. which are in high demand in Serbia.

Serbian President warmly welcomed his offer and stressed devising an institutional mechanism for collaboration in respect of labour and manpower from Bangladesh.

While stressing on forging stronger trade and economic links between the two friendly countries, Bangladesh Minister urged Serbian investors to import from Bangladesh and invest in the country utilizing the excellent investment climate offered by the Government.

While mentioning that Bangladesh is currently hosting 1.2 million forcefully displaced Myanmar nationals known as Rohingya refugees, Momen sought the support of the friendly countries like Serbia in putting pressure on the Myanmar junta for the volunteer, safe and sustained repatriation of the Rohingyas sheltered in Bangladesh.
Vucic appreciated the generosity of Bangladesh in this regard.

Momen invited the Serbian President to visit Bangladesh on behalf of the President of Bangladesh which he gladly accepted.

He also invited the President and Prime Minister of Bangladesh.

Bangladesh Foreign Minister is currently attending the High-Level Commemorative Meeting to Mark the 60th Anniversary of the Non-Aligned Movement (11-12, October 2021) in Belgrade which is being attended by over 40 Ministers and around 70 countries.