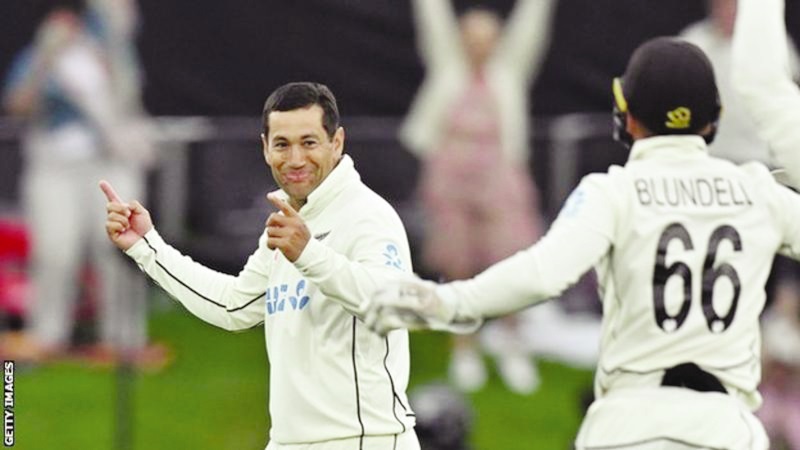 BBC : [2] Ross Taylor ended his Test career by taking the winning wicket as New Zealand beat Bangladesh by an innings and 117 runs to draw the series.

[3] Taylor took just his third Test wicket to remove Ebadat Hossain with his part-time off-spin and wrap up victory in the second Test in Christchurch. The two-match series is drawn 1-1 after the tourists’ shock win over the world champions in the first Test. “It’s a great way to finish,” said Taylor, 37. “I wanted to finish with a win and the guys definitely gave it to me. “It was an emotional game for me and my family.” Taylor finishes his 112-match Test career as New Zealand’s highest run-scorer in the format, with 7,683 runs, including 19 hundreds, at an average of 44.66.

[4] He will end his Black Caps career with six one-day internationals against Australia and the Netherlands between January and April.

Taylor was given a guard of honour by Bangladesh on his way to the crease on day two for what proved to be his final Test innings, in which he scored 28 as the hosts made 521-6 declared.

They enforced the follow-on overnight after bowling out Bangladesh for just 126 in reply.

The Tigers showed more resistance in their second innings, reaching 105-2 with Liton Das hitting a fluent century as he made 102 off 114 balls.