[1] Politically good enough: Palestine on Bangladesh’s clarification [2] “Sincerely hope that Bangladesh will revise this decision as it represents good support to Palestine” 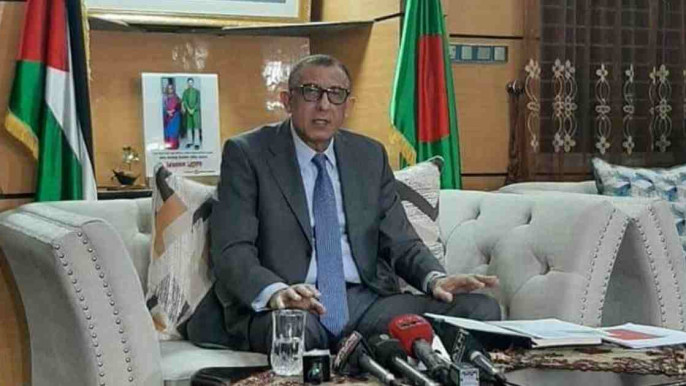 Rubaiya Tripty of DOT
[3] “Politically this (Bangladesh’s clarification) is good enough for me,” he said on Monday thanking Foreign Minister Dr AK Abdul Momen who explained the situation and clarified the position of Bangladesh assuring everybody that nothing has changed in the foreign policy of Bangladesh and Bangladeshi citizens are still prohibited to go to Israel, reports UNB.[4] “It is unacceptable, it’s obviously unacceptable. It cannot be acceptable for us. But finally Bangladesh is a sovereign State and that we respect. Since you’ve asked about my feeling and the majority of the Palestinian people, I’m being frank with you about my feeling that is unacceptable,” he told one of the questioners.[5] “You’ve such an amaging principle. We don’t compare you with anyone. I’m saying that from my heart. It’s not lip service. It’s true. You’re magnificent people. We’ll never forget your support, solidarity and principled attitude,” he said.
[6] While talking to a small group of journalists at the Embassy, the Palestinian Ambassador appreciated the generosity of Bangladeshis, including expatriates Bangladeshis in Malaysia, Saudi Arabia, the United Arab Emirates, Oman, Qatar and Bahrain.
[7] Ambassador Ramadan said the change in passport was received by Israel in a way like it was a reward.
“And they’ve tweeted, the Ministry of Foreign Affairs (MoFA) tweeted as you all know, the next step for Bangladesh, they wish, will be diplomatic relations. That’s why it didn’t send a clear message to Israel, the wrong message was sent to Israel after the incident, after the crime was committed, after the atrocity, and after we faced this suffering. It was not the right time at all. And I believe it should have been [done] later on,” he added.