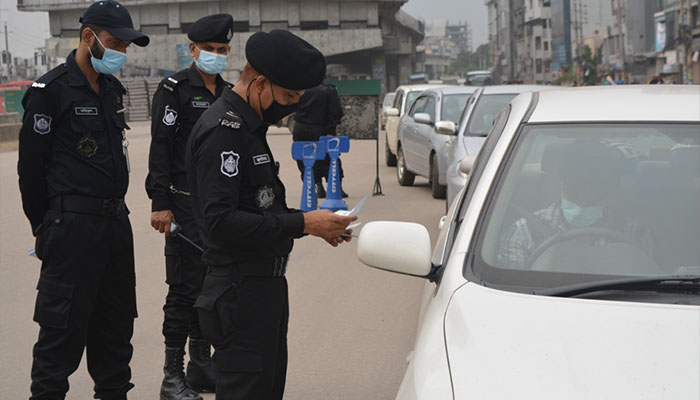 Tahtheera Sultana of DOT
[3]People’s reluctance to abide by the ongoing strict rules is increasing day by day. Besides emergency work, people are taking to the streets with various excuses. Even on the eighth day of the strict curfew yesterday, the movement of vehicles and people in the capital did not decrease at all, reports Bhorer Kagoj.

[4]Private cars, trucks, covered vans, pickups are moving with people. Despite the fact that the corona virus has killed more than 200 people in a single day and the infection rate has crossed 31 percent, there has been no awareness among the people about hygiene and movement control.

[5]Dhaka Metropolitan Police (DMP) Commissioner Mohd. Shafiqul Islam was speaking as the special guest at a function to distribute food and cash among the needy of the Bangladesh Shop Owners Association yesterday at noon, reports Daily Janakantha.

[6]The DMP commissioner said, ‘The whole world is going through a disaster now. The situation of developed countries is the same as that of poor countries. Millions of people have died in various countries, including the United States, Brazil and India. Here, however, it is not a matter of who has improved the medical system and whose financial condition has improved. If we want to live, we have to save ourselves. No one else can come and save you.’