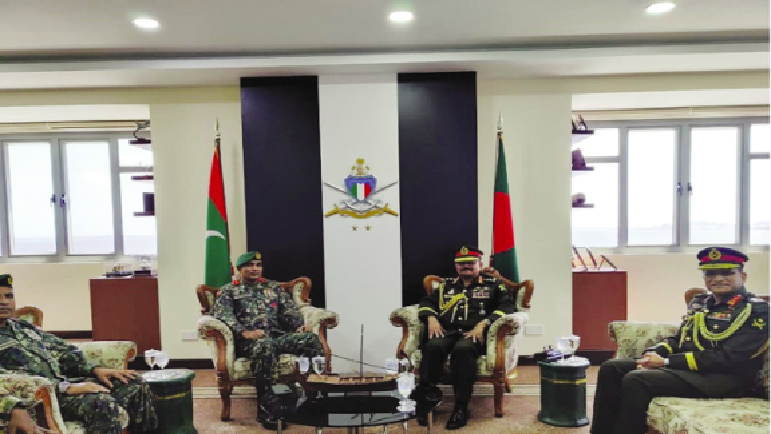 Imrul Hossain for DOT
[2] Maldives Minister of Defence Mariya Didi has sought help from the Bangladesh Army for tackling various natural disasters and enhancing rescue capacity, report Somoyer Alo, NTV. She also said that Bangladesh may play a positive role in this regard. [3] She said this during a bilateral meeting with the Chief of Army Staff of Bangladesh General Aziz Ahmed. According to the ISPR, General Aziz Ahmed returned home yesterday after his state visit to Maldives. [4] Minister Mariya shared warm greetings and gratitude on behalf of President and Commander-in-Chief His Excellency Ibrahim Mohamed Solih to General Aziz for making the visit, even in this difficult pandemic-stricken time.

[5] Discussions focused on boosting the close ties of Defence Cooperation between the Maldives and Bangladesh, including in the areas of capacity-building in Disaster Relief operations and Anti-Human Trafficking efforts, increasing allotments for Maldivian doctors at the Armed Forces Medical College and training opportunities for Maldivian military personnel.

[6] Minister Mariya thanked General Aziz Ahmed and the Government and friendly people of Bangladesh for the generous assistance rendered to the Maldives in times of need, ranging from the 2004 Tsunami to the ongoing COVID-19 pandemic.

[7] General Aziz Ahmed arrived in the Maldives at the invitation of Chief of Defence Force of Maldives Major General Abdulla Shamaal with a 9-member delegation of the Bangladesh Army.