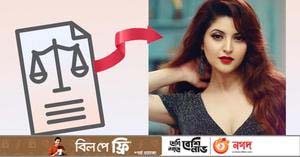 Shahnaz Begum of DOT
[2] Actress Pori Moni has been given a legal notice to remove several photos and videos posted on social media. These pictures and videos have been called obscene and have been asked to be removed within the next 30 days, reports Jugantor.[3] The notice also asked Moni to refrain from any kind of obscene dialogue, acting and gestures in the future.

“Don’t Love Me Beach” was written on the palm of his hand as he was being released from prison.

[6] Besides, Pori Moni celebrated her 30th birthday on October 24 at Hotel Radisson Blu in Dhaka. The notice stated that her dress and gestures were obscene that day.

[7] It is further said that Pori Moni is a film actress. Many follow her. Children and adolescents can be greatly affected. So she has to consider this issue.