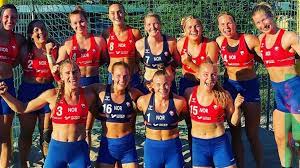 CNN: [2] The Inter-national Handball Fe-deration has changed its much-criticized uniform regulations for beach handball, meaning female players will now wear shorts instead of bikini bottoms.
[3] The change comes after the Norwegian women’s beach handball team was fined for wearing shorts in a game against Spain earlier this year.

The European Handball Federation had said the shorts were “improper clothing” in the statement announcing the 1,500 euro (around $1,735) fine — 150 euros ($173) per player.
[4] At the time, the team’s coach Eskil Berg Andreassen told CNN that the uniform regulations could discourage women from playing the sport, and singer-songwriter Pink slammed the regulations as “sexist” and offered to pay the fine on behalf of the Norwegian team.

The new uniform regulations, which are dated October 3, state that “female athletes must wear short tight pants with a close fit” and also include tank tops for women, rather than the crop tops stipulated in the old regulations.

[5] Male players are also instructed to wear tank tops and shorts, although there is no stipulation for the shorts to be tight-fitting as stated in the women’s regulations. Norway’s team line up during 2018 Women’s Beach Handball World Cup final against Greece in July 2018. Since the fine was imposed on the Norwegian team, handball authorities have been put under considerable pressure to amend their regulations.

A change.org petition calling for the fine to be dropped and for women to be allowed to compete in shorts gained more than 60,000 signatures, while sports ministers from Norway, Denmark, Finland, Iceland and Sweden also called on the IHF to review its uniform policy.
“With those bikinis, we were all the time checking if it’s in the right place. We were focusing on other things than the sport — and that’s not something we want,” Julie Aspelund Berg, a defender with Norway’s beach handball team, previously told CNN.