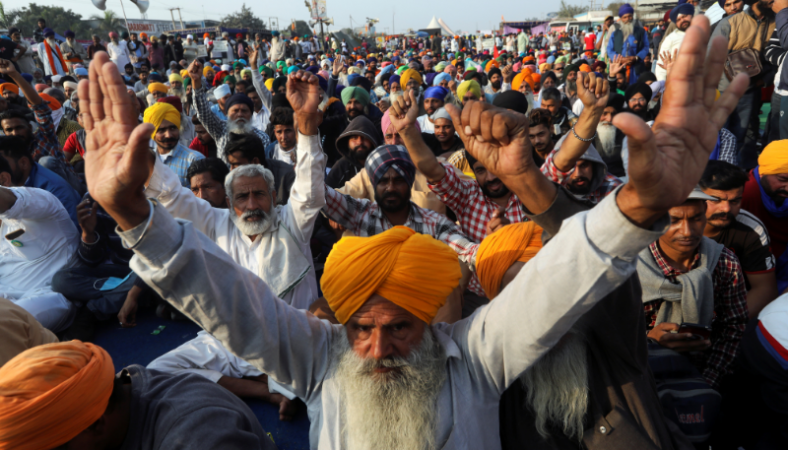 Reuters: [2] Indian Prime Minister Narendra Modi may have caved in to farmers’ demands that he scraps laws they say threaten their livelihoods.

[3] But reaction to the shock U-turn in India’s rural north, where Modi’s Bharatiya Janata Party (BJP) faces key elections next year, has been less than positive, a worrying sign for a leader seeking to maintain his grip on national politics.

[4] In the village of Mohraniya, some 500km by road east of the capital New Delhi and located in India’s most populous state of Uttar Pradesh, farmer Guru Sevak Singh said that he and others like him lost faith in Modi and his party.

[5] “Today Prime Minister Modi realised that he was committing blunder, but it took him a year to recognise this and only because he now knows farmers will not vote for his party ever again,” said Singh. [6] Singh’s 19-year-old brother Guruvinder was killed in October when a car ploughed into a crowd protesting against the farm legislation, one of eight people who died in a spate of violence related to the farmers’ uprising.

[7] Thousands of agricultural workers have protested outside the capital New Delhi and beyond for more than a year, shrugging off the pandemic to disrupt traffic and pile pressure on Modi and the BJP who say the new laws were key to modernising the sector.

“Today I can announce that my brother is a martyr,” Singh told Reuters, weeping as he held a picture of his dead brother.

“My brother is among those brave farmers who sacrificed their lives to prove that the government was implementing laws to destroy the agrarian economy,” he added.

Around him were several police officers, who Singh said were provided after his brother and three others were killed by the car. Ashish Mishra, son of junior home minister Ajay, is in police custody in relation to the incident.

Ajay Mishra Teni said at the time that his son was not at the site and that a car driven by “our driver” had lost control and hit the farmers after “miscreants” pelted it with stones and attacked it with sticks and swords.

‘How can we forget?’

In 2020, Modi’s government passed three farm laws in a bid to overhaul the agriculture sector that employs about 60 per cent of India’s workforce but is deeply inefficient, in debt and prone to pricing wars.

Angry farmers took to the streets, saying the reforms put their jobs at risk and handed control over crops and prices to private corporations.