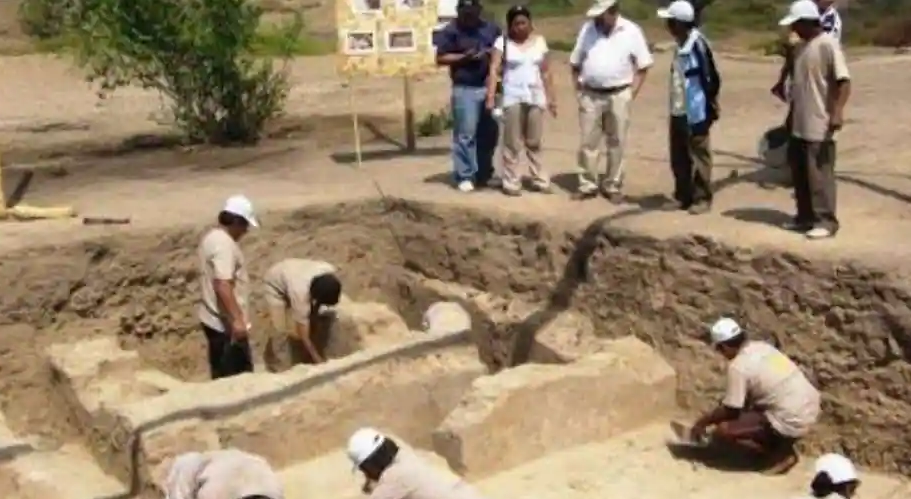 Wion News: [2] At a site in the Lambayeque region of northwestern Peru, archaeologists have unearthed 29 human bodies ento-mbed around 1,000 years ago. The site is at Huaca Santa Rosa de Pucalá.

[3] Four skeletons, which are of two children, a teenager and one adult, date back to the Wari civilisation.
Edgar Bracamonte Lévano, excavation’s director and research archaeologist, Royal Tombs of Sipán museum, told Live Science through email, “These skeletons represent the region’s first known examples of human offerings from the Wari civilisation.” [4] The excavation also unearthed skeletons of eight guinea pigs and several alpacas and llamas, all of which seem to be sacrificed.
Bottles, pots and a knife with a half moon-shaped blade were also found at the site.

[5] The tombs were recognised as Wari by the researchers as they were surrounded by three distinctive, D-shaped enclosures typical of the culture’s religious spaces. [6] The human offerings may have been “part of a possible ritual carried out at the time of starting the construction of these Wari-style religious spaces,” Lévano said.
In addition to four human offerings, the archaeological team also found a fifth individual, who had undergone secondary burial. “That is to say, he was buried elsewhere and [then] reburied inside the D-shaped enclosure,” Lévano added.