[1] “If Begum Zia needs to be taken abroad, she needs to apply again going jail” 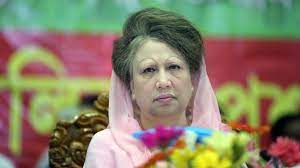 Tasmiah Nuhiya Ahmed of DOT
[2] The law ministry has suggested extending the sentence of BNP chairperson Khaleda Zia for another six months. However, if Khaleda Zia wants to be taken abroad, she will have to go to jail and apply again. Whether it will be approved then will depend on the discretion of the government. Law Minister Anisul Haque said this in the first light on yesterday, reports Prothom Alo.

[3] The minister said there was no scope for reconsideration of Khaleda Zia’s application to be sent abroad as per Section 401 of the Criminal Procedure Code. She has to go to jail and apply again. However, whether the application will be approved or not, it will depend on the government.

[4] On March 25 last year, the government released Khaleda Zia, convicted in a corruption case, for six months, suspending her sentence conditionally under the Criminal Procedure Code. After that time, suspension of her sentence was further extended again for six months.
The condition was, she has to take specialized treatment inside the country and during this period she can not go outside the country.

[5] The release is due to end this month. The process is now underway to extend the existing term by another six months.