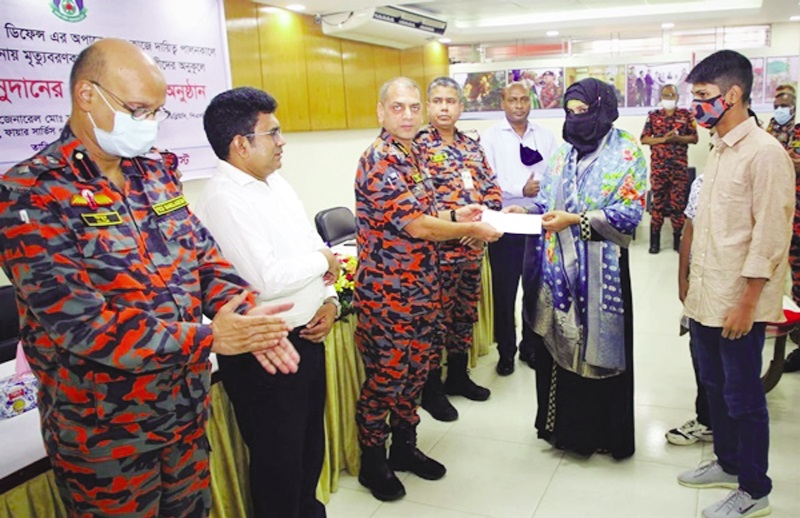 Hossen Sohel for DOT
[2] Fire Service Welfare Trust on Tuesday handed over a cheque for Tk 10 lakh to the family of the late Abdul Matin, a diver of the Fire Service and Civil Defence Directorate, who died during a rescue operation this year, report Dhaka Post, The Daily Sun.

[3] Brigadier General Md Sazzad Hussain, Director General of Fire Service and Civil Defence (FSCD) Directorate handed over the cheque to Nasima Khatun, wife of the late Abdul Matin, at the conference room of the FSCD Directorate in the city on Tuesday. At the same function, a cheque for Tk 1 lakh was given to the families of each of the three members of the FSCD Directorate who died of corona.

[4] Besides, a check for the donation was also handed over to Vishnupad Mistry, a firefighter who was injured in the Armanitola fire.
[5] The directors of the directorate, project directors, deputy managing director of the welfare trust, senior officers of the directorate and other officers and employees were present at the event. [6] It is mentionable that the diver Abdul Matin got stuck under the water on August 28 while trying to rescue a person who drowned in the Punarbhaba River in Dinajpur.
Failing to trace him for a long time his colleagues sensed his danger and rescued him in a critical condition. He was rushed to the hospital where doctors pronounced him dead.