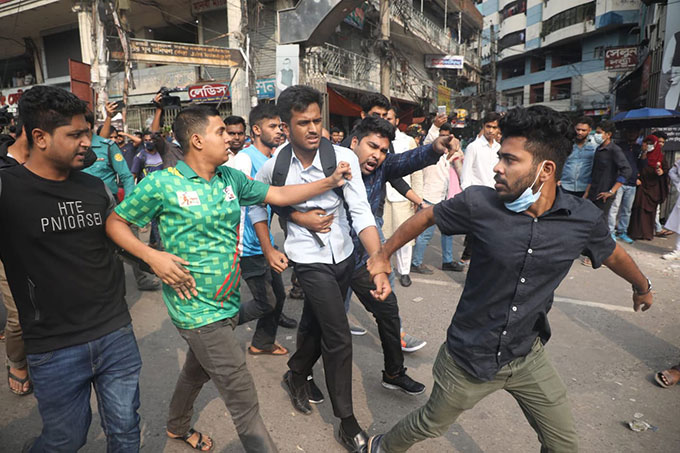 Shahnaz Begum of DOT
[2] Leaders and activists of Chhatra League have attacked the students who were blocking the demand for half fare in public transport. Yesterday they blocked the road at the Science lab corner of the capital, reports MZamin.

[3] Some activists of Dhaka College Chhatra League attacked with sticks, rods and other local weapons. Several students were injured in the attack. The motorcycle was vandalized. [4] Shahen Shah Mahmud, ADC, New Market Zone, said, “A chaotic situation has arisen over the vandalism of a Dhaka College student’s motorcycle. We calmed both parties down and sent them to their respective colleges. The situation is calm now.

[5] Earlier, at around 12:30 pm, various college students blocked the road at the Science lab corner of the capital demanding effective half-fare. Students from City College, Dhanmondi Ideal College and several nearby colleges took part in the blockade.

[6] The students said that in the last road movement the demand of the students was to ensure half fare. But it has not been implemented for a long time. So once again ordinary students have taken to the streets to get their demands met.