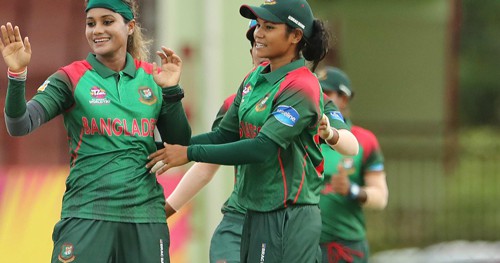 [3] Bangladesh who also won the first game by eight wickets, now took an unassailable 2-0 lead. The bowlers came up with good performance like the first ODI, wrapping up the hosts for just 121 in 46.4 overs with Nyasha Gwanzura making the highest 35 not out. Opener Modester Mupac-hikwa was the other notable scorer with 33. Nahida Akter was the most successful bowler for Bangladesh with 3-30 while Jahanara Alam and Salma Khatun took two wickets apiece.

[4] Bangladesh though lost opener Sharmin Akhter cheaply, reached 125-1 to win the game in just 24.3 overs thanks to Murshida Khatun, the another opener and Fargana Hoque.

Both of the batter hit an unbeaten half-century to help the side clinch the game without any trouble. Fargana was unbeaten on 53 while Murshida made her career-best 51 not out.

The three-match series is the part of Bangladesh’s practice campaign for the ICC Women’s World Cup Qualifier, which will also be held in Zimbabwe.