[1] Assam, Mizo CMs face off over violence at their border; 6 cops killed in clashes 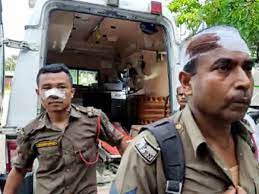 [3] Violence broke out at the Assam-Mizoram border shared by Cachar district’s Lailapur and Kolasib district’s Vairengte around 11.30am over allegations of encroachment. Thousands of civilians on either side of the border hurled stones and charged at each other and security personnel with sticks and rods. Visuals showed policemen firing tear-gas shell and air pellets as people torched vehicles and huts.

[4] “I am deeply pained to inform that six brave jawans of Assam Police have sacrificed their lives while defending constitutional boundary of our state at the Assam-Mizoram border. My heartfelt condolences to the bereaved families,” Assam chief minister Himanta Biswa Sarma tweeted.

[5] Mizoram home minister Lalchamliana accused Assam Police of entering Mizoram’s territory and committing arson. “Upon learning of the arson committed by Assam Police, residents of Vairengte town, Kolasib district proceeded to the site to inquire. These unarmed civilians were assaulted by Assam Police by lathi charging them and firing tear gas, thereby causing injuries to several civilians,” read the statement.

The hostilities pared down after the chief ministers spoke on the phone. Shah also spoke to both chief ministers, asking them to resolve the border issue amicably without any violence, people familiar with developments said. Senior Union home ministry officials are closely watching the developments at the interstate border, said the people quoted above.

Officials at Silchar Medical College Hospital (SMCH) in Assam confirmed on the condition of anonymity that 36 people were admitted with injuries from air gun shots and stone pelting. Cachar superintendent of police VC Nimbalkar was in the intensive care unit. Details of injuries on the Mizoram side were not available.

The violence came two days after the chief ministers shared a stage with Shah and spoke of resolving the border dispute amicably. The Bharatiya Janata Party (BJP) is in power in Assam and Mizoram is ruled by the Mizo National Front.

Assam’s Barak Valley districts of Cachar, Karimganj and Hailakandi share a 164.6 km long border with Mizoram’s Aizawl, Kolasib and Mamit districts. Mizoram was a part of Assam till 1972 when it became a Union Territory. It became a state in 1987. The territorial dispute has festered since then and fuelled sporadic clashes, the latest of which rocked the region in August 2020 and February 2021.

Tensions first flared up around 11.30am, when around 200 Assam Police personnel attempted to construct a camp inside Mizoram’s territory, according police. While discussions were on between police officials of the two states, a group of people from Mizoram allegedly started pelting stones, the officials said requesting anonymity. Locals on the Assam side retaliated, they added.

Senior administrative and police officials were immediately rushed to the spot but the violence worsened around 3:45 pm. Assam residents alleged tear-gas shells and air guns were fired from the Mizoram side.

“I was near border area when people from Mizoram started firing. We tried to run away but a bullet touched my right arm and I fell on ground,” 25-year-old Fajar Ali, a resident of Assam who sustained an air gun injury on his hand, said.

In a statement, Lalchamliana rejected these charges and said Assam Police personnel forcibly crossed the border post and damaged vehicles on the National Highway. CRPF officials were not immediately available for comment.

He said Assam launched a volley of tear gas canisters and grenades at Mizoram Police around 4:50 pm. “Mizoram Police responded spontaneously by firing back at Assam Police,” he said.

Mizoram said after Shah spoke to both chief ministers, Assam Police withdrew and handed the post back to the CRPF.

The clashes took a political turn at 1.50pm whe