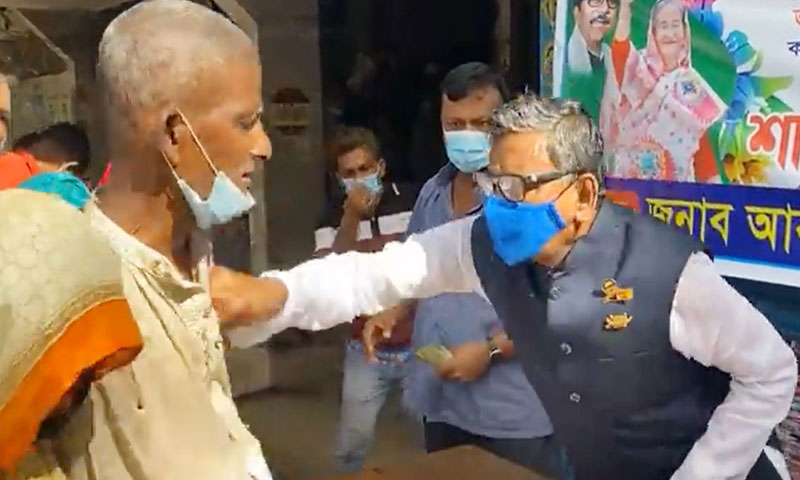 Tasmiah Nuhiya Ahmed of DOT
[2] Mayor Abdul Quader Mirza has been seen punching an old man who came to Noakhali’s Basurhat Municipality premises to collect relief in a video. The video has spread on social media Facebook, reports Jagonews24.com.

[3] The incident took place on Friday (July 18) morning at a ceremony to distribute clothes among the poor and helpless on the occasion of the upcoming Eid-ul-Azha.

[4] As seen in the video, Quader Mirza handed over a saree to an old man. Mayor Quader Mirza punched the old man in the chest when he wanted to change the saree. He was later seen throwing a saree. Quader Mirza was seen hitting another person with a packet to get relief, reports PurboPoshchimbd.

[5] Despite repeated calls on the mobile of Basurhat Municipality Mayor Quader Mirza to speak on the matter, he was found busy.

[6] A Quader Mirza has faced widespread criticism over the issue.

[7] “As a nation, we are ashamed,” Rahi Hudda wrote on Facebook.
Another Facebook user named Asibul Hossain wrote, what kind of barbarism is this in the name of giving gifts? What kind of oppression is this on old people? Basurhat Municipal Mayor Abdul Quader Mirza is carrying out barbarism by putting up a banner under the direction of People’s Leader Sheikh Hasina. Leader of the people Sheikh Hasina considers herself a servant of the people and Abdul Quader Mirza as a terrible ruler there”, PurboPoshchimbd report further reads.