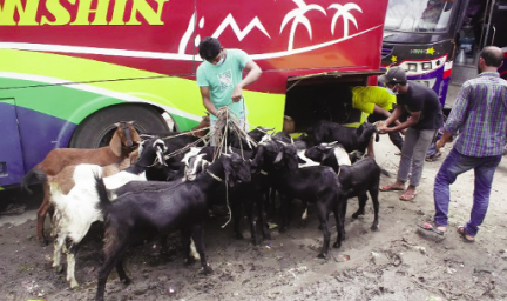 Labiba Nayeem Khan of DOT
[2] According to Bangla Tribune, a news item titled ’46 goats trapped in 14-hour bus locker ‘was published in the media on July 18. According to the report, 46 goats were taken to Sylhet from Dinajpur by a passenger bus named Nowshin Paribahan. The goats got sick after being stuck in the locker for a long time in a barbaric way and transported.

[3] Assistant Inspector General of Police (AIG) Sohail Rana told bdnews24.com on Saturday that 46 goats had been taken to Sylhet from Dinajpur in a luggage box. The goats got sick after being kept in the box for a long time in a barbaric way.

[4] As soon as the matter came to light, the Media and Public Relations Department of the police asked the OC of Sadar Police Station of Dinajpur District to investigate and take immediate action, according to ittefaq.com.